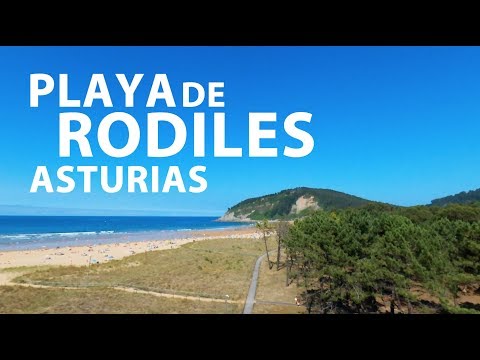 Beach of the Orient of Asturias. Of the large estuaries of the region, Villaviciosa and Eo are the only ones that do not harbor important ports or have been absorbed by urban development. For this reason the original environmental conditions are preserved to a great extent, with a vegetation of exclusive species and being also a wintering place and migratory passage for many waterfowl.

Map: how to get to La playa de Rodiles and the ría de Villaviciosa

The limits of the Protected Space coincide practically with the roads that run along the banks of the estuary, one communicates the population of Villaviciosa with the small Puerto del Puntal and Tazones, and the other one brings us up the beach of Rodiles.

It is an ecosystem of an extraordinary vegetal and faunal richness.

The majority group in the Ría is the one of the acuatic birds, almost all of them migrating. The estuaries are places where they can find abundant food: fish, crustaceans, molluscs, worms, etc. All the estuaries of the Cantabrian coast play a crucial role for the bird migrating populations of Europe. Its presence is especially large in spring and autumn, scarce in summer and variable in winter. In Villaviciosa you can usually see three types of birds: waders, herons and swimmers. The Golden Plover, the Lapwing, the Common Snipe, the Great Chorlitejo, the Common Sandpiper, the Little Egret, the Gray Heron ..., the Mallard, the Mallard Duck, the Spoon Duck ... and a long etcetera.

Among the first, mention the Rodiles Beach, which extends east of the estuary of the estuary with 1 km. of length and 350.000 square meters of surface at low tide. The action of the wind creates in Rodiles a dune field that closes the beach to the south and where both mobile and fixed dunes can be recognized. It is a meeting point for many Asturians on summer weekends, has ample parking and services of restaurants and bars. To get from Villaviciosa you have to take the N-632 road to Lastres, and take the VV-6 turn, a detour to the left that takes us through the town of Selorio and leave behind the small beach of Misiego.

It should also be noted that in the cliffs of the nearby town of Tazones we find an important deposit of dinosaur footprints, icnitas, which constitute an extraordinary testimony of the passage of these animals over the marshy areas of the area.

The "Asturian Jurassic" extends along a coastal strip that from Cabo Torres, west of Gijón, goes to Ribadesella. For more information about the Jurassic in Asturias www.museojurasico.com

Reception and Interpretation Center of the Partial Natural Reserve of the Ría de Villaviciosa.
Carretera del Puntal (VV-5, km 4.1).
Give us your rating
Punctuation: 9.0. of 2 votes.
Please wait ...

2 answers to "Rodiles beach and the Villaviciosa estuary"

Answer to The beach of Rodiles, estuary of the estuary of Villaviciosa beaches Asturias | Beaches | desdeasturias.com Cancel reply