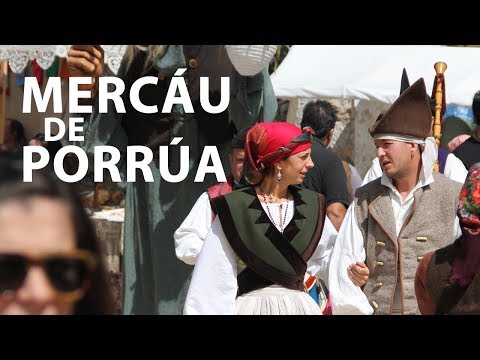 If it is good, a radiant sun usually illuminates the dawn of the medieval Porrúa. At midmorning the preacher anticipates the essence of Mercau Astur that every year jumps to the scene at the end of August: "So you play them and you read them, the bailes, llambionaes, magicians, juggling, vaques, bruxes and cabezudos, xigantones and potters ....".

Porrúa imagines each year those distant times in which there was no industry, new technologies or cities. Every year the fourth weekend of August is celebrated. This 2016 on 27 and 28 days in August.

Map: how to get to El Mercau Astur de Porrúa

The rural environment of the village recreates its own past and, in the abstract, tries to summarize the compendium of Asturianía. About a hundred artisans (of fabrics, espadrille, gastronomy, wood carvings, goldsmithing, bagpipe construction ...) and around 300 extras animate a market that Porrúa invented a decade ago for the rest of Asturias.

Over the course of this historic weekend the expectation is growing. The "spectators" are this singular work take advantage of the breaks of the function to eat some ribs, Creole sausages, cheeses and, incidentally, they buy a souvenir to hang on their lapel or on the walls of their house. The aromatic herbs fill the air, and the animation follows its own development of the creative hand and the professional good work of actors of the region who walk openly among us, the extras. "How nice that we are here again!", Greets a hypothetical Asturian family lost in a most incredible adventurous exile. The paisanu, the primu estudiau, the picarón, the tíu and the neña, say that they left the Pyrenees years ago, crossed Europe, arrived in Siberia, descended to Arabia, embarked and arrived at African coasts, from there to America in another boat, almost nothing. And from each place they brought a million anecdotes and some Aborigine captive to show which weirdo. Porrúa arrive plethoric in spite of such a long journey, and in all cases diabolo experts and contortionists are shown.

The "boss" of the family, Rafa González, the "countryman" of 2 meters and a half high, fitted in his stilts, explains why Porrúa as a trip end: "we come to ask because the world is more I'm glad that here, yes, some exceptional day we used to put fishing boats on the high seas, "he recalled.

Y between function and function, cheeses and donuts, also runs the cider as well as the town crier had warned at the beginning of the Folixa: "and in Porrua ta the cider is very fresh and there are lots of cosuques to fill the guelph and the batiellu". It is more: "to the one that the mercau does not atopa, or it is blind or it is an idiot, because there are boys like roses and of young men the flower d'ellos, and you win them of folixa caricoses they are encesos (burning embers)".

Evening arrives late in the magical village and slyly, while the frixuelos, sausages and the liquid element are still running, and a posh musician jumps into the street theater to delight the audience with a concert, half music and half mythological narration, in the that xanas, goblins, busboys and other strange beings parade in the middle of the show. The fire, as tradition dictates, adorns the corners of Porrúa Square, and the village goes back to the legend.

They do not usually miss in these days the performances of the folkloric groups of the council that usually conclude their dances with the popular Dance prima, the most autochthonous of dances, as a finishing touch.

La cultural association the "Llacín", formed by neighbors of Porrúa, is the driving force of the event. He never hides his satisfaction with the popular feeling of the Mercau, and never ceases to be surprised by the expectation generated by his initiative. Nor do they hide the secrets of success: many people working much of the year so that everything goes well. In the town every year that passes more people are involved in the organizational aspects. This neighborhood association, which does not stop, was also the one that promotes and manages another traditional jewel of the region: The Ethnographic Museum of Porrúa, which should not be lost if you approach this village as Asturian as any.