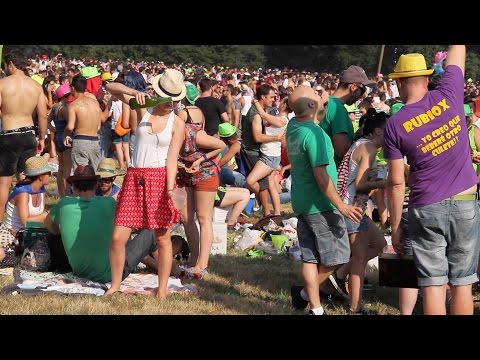 La Pola, in the center of Asturias, is a populous town that likes pilgrimages. With the arrival of summer always celebrates one of the busiest and busiest summer parties: Carmine.

People prepare their empanadas and their tortillas, and the cider runs in torrents. The standard clothing is: jeans, white shirt and blue scarf Asturias neck. This year 2018 is the 23 of July

Map: how to get to Fiesta del Carmín in Pola de Siero

Any place is good for the party, but the polesos have chosen nature. A green island near the urban center, with forest included to be in the shade if the heat tightens. The early morning people go up to the prao around five o'clock in the afternoon. There is a ceremonial act, an advance party that redoubles drums and bagpipes inaugurating the pilgrimage and camping. The music bands, the chiringuitos proliferate, and the time passes quickly between the excellent atmosphere, being able to extend until well into the dawn.

Years ago when they returned to the village, the pilgrims asked their neighbors for water. And from the balconies the cauldrons poke to soak up the staff. Nowadays it is something that is lost. The older ones approach the classic verbena, the young people usually stuff pubs and discos until the body endures.

But the Carmine is not a circumstantial or capricious event, it is a party with a tradition and many arguments. We can go back in time and thus approach the very essence of a celebration that today knows no borders.

Already in the seventeenth century A chapel dedicated to Our Lady of Carmen was built in the square of what is now «Les Campes», although it was later demolished in 1810 by agreement of the brotherhoods of the Brotherhood of Carmen as it served as a parapet to the French. Its altarpiece and its image changed the place of worship, then going to the parish temple that was burned in the revolt of the 36.

The celebration was always reserved for the Sunday following the 16 of July of each year, and because of the high number of brotherhood of the brotherhood, the party was repeated the next Tuesday, smaller, and therefore the llamban "Carmine".

The image of the hermitage was taken out in procession so that everyone could see it. The huge crowd and the pilgrims adored her in the shade of old chestnut trees. Farewell, the traditional dance of the Prima Dance, with the refrain "Long live the Virgin of Carmen." The eel empanadas replenished the forces of the pilgrims.

Over time, some things have changed, at the beginning of the 20th century the Music Band announced the beginning of the festivities, the first festival was always held in the church square until in the 20 years the creation of the park changed the physiognomy of the Pola and the party.

Today, religious acts are somewhat relegated by the echo that currently have the profane. What is known as «Pilgrimage of Asturias» continues to have an exceptional reception and as has already been said, the poles and foreigners go to the prao with their empanadas, not already eels, their pre-baked buns ... and their good bottles of cider.

Oh! a gallant of this house

One response to "Fiesta del Carmín in Pola de Siero"