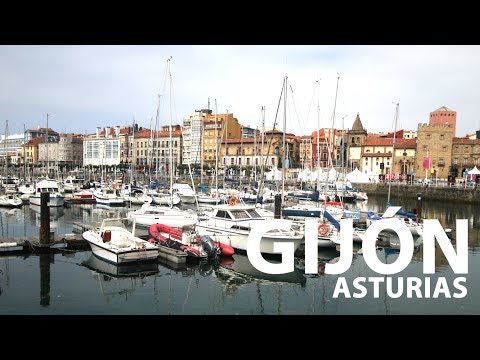 Gijón is the largest city of the Principality of Asturias, and industrial and tourist capital of the region. A city in expansion, in a growing municipality. Its location in front of the sea, in the geographical center of the Asturian coast, has made it worthy of denominations such as capital of the Costa Verde. Gijón is a well structured and communicated town, with great capacity for urban development.

The Abba Playa Gijón is located on the beachfront, with spectacular views of the beach of San ... END_OF_DOCUMENT_TOKEN_TO_BE_REPLACED

The AC Hotel Gijón is located on Avenida de Oviedo, in a residential area near the center of Gijón ... END_OF_DOCUMENT_TOKEN_TO_BE_REPLACED

This hostel is the perfect accommodation to get to know the old town of Gijón. Located at 170 meters from ... END_OF_DOCUMENT_TOKEN_TO_BE_REPLACED

Hotel Marqués de San Esteban is a modern and cozy hotel of 3 stars located in a beautiful ... END_OF_DOCUMENT_TOKEN_TO_BE_REPLACED

We have 20 apartments in 3 different formats: Matrimonial studies 1 apartments ... END_OF_DOCUMENT_TOKEN_TO_BE_REPLACED

Our hotel is located in the marina of Gijón, and one step from the heart of the city. With … END_OF_DOCUMENT_TOKEN_TO_BE_REPLACED

Our hotel is located on the cliffs of the coast of Gijón, being a place for rest and relaxation ... END_OF_DOCUMENT_TOKEN_TO_BE_REPLACED

Map: how to get to Gijón: basic information

It is the capital of the Costa Verde and urban development coexists with a privileged natural environment. Gijón has something of a great village. The affable nature of its people, the absence of stress and the survival of the Asturian landscape even in its most avant-garde neighborhoods, make it even more charming.

To the north it borders the Cantabrian Sea, to the east with the council of Villaviciosa, and to the west it borders on Carreño. To the south, the municipalities of Siero, Corvera and Llanera.

Gijón occupies a privileged geographical position on the Asturian map, a few minutes from Oviedo and Avilés, on the highway «Y», great artery of the Asturian metropolis, and half an hour from the airport of Asturias, which maintains daily connections with the main Madrid, Barcelona, ​​La Coruña, Balearic, Canary, Paris and London cities.
Two major roads by road we can highlight: from south to north, it is defined by the Carretera Nacional N-630 Ruta de la Plata (Gijón-Sevilla) and parallel to it the A-66 (León-Gijón) expressway allow a comfortable displacement from the center of the peninsula.
The second East-West axis, through the entire Cantabrian Cornice, is articulated by the N-634 National Road (Irún-Santiago de Compostela).

The Gijón past has enough archaeological and documentary motifs. On the Campa Torres, vestiges of a large military settlement of the first century of our era. There is also data of an important Roman settlement, as well it is seen in the ruins of the thermal complex of Campo Valdés, with defensive walls around. Some of the objects and ruins that appeared in these excavations are currently exhibited in the Clock Tower in the neighborhood of Cimadevilla. In between these two stages the toponym Gegio made its appearance, from whose ablative (Gegione) derives the current name of the city. Later Gjon would be battlefield in the dynastic wars Initiated between Enrique de Trastámara and his stepbrother Pedro I El Cruel in the second half of the 14th century.

Under the rule of The Catholic kings the town grows demographically and commercially. But it would be in the XVIII and XIX centuries, always under the tutelage and leadership of Gaspar Melchor de Jovellanos, when the city experienced a true modernizing leap. From the plan of improvements that this enlightened began the city takes on true dimensions with an urban widening, layout of streets, boulevards, etc. that were gradually eating land to wetlands and sand.

The implementation of the railroad in Asturian territory also benefited the growth of Gijón, which in parallel grew in port facilities with the great Port of El Musel. Railway and port, together with the coal boom in the center of Asturias, turned Gijón into one of the industrial references of northern Spain. During the twentieth century the city lived in conflict with the 34 revolution and several episodes of the Spanish Civil War that led to a hard and long postwar. Gijón came out vigorously in the 50 decade thanks to the metallurgical industry: first Uninsa, then Ensidesa, later Aceralia. Thousands of families of workers, from other peninsular regions, sought and found their new home here and, with it, brought about a demographic explosion that led to very plural social habits at the same time. Gijón boasts of being a cosmopolitan urban town, progressive and a lover of culture. Not in vain is the birthplace of Jovellanos and has a active museum network located in recovered buildings for the enjoyment of heritage and art: Revillagigedo Palace International Art Center, Piñole Museum, Evaristo Valle Museum, Barjola Museum, etc ...

Currently, Gijón also stands out with a wide range of commercial and services, without losing sight of the technical studies and the technological advances that are developed in its University campus. In tourism, Gijón is not ahead of other sectors, thanks to a wide cultural and landscape offer in the council, with three large urban beaches of San Lorenzo, Poniente and Arbeyal, these last two artificial, which guarantee bathing in the Cantabrian

In the old town of Cimadevilla you can contrast another of the historical facets of this great village: the sailor, in a neighborhood where architecture looks out to sea and in which Eduardo Chillida placed his Praise of the Horizon. An immense sculpture that currently serves as a symbol of the city and stands on the Hill of Santa Catalina, a promontory in which local history also begins with ancient settlements.

Green Path of the Camocha.

Day of Asturias in Gijón, first Sunday of August.

Sunday trail in the vicinity of the Molinón.

Ecological and artisan market, 2º weekends of each month in the Plaza Mayor Ayto.