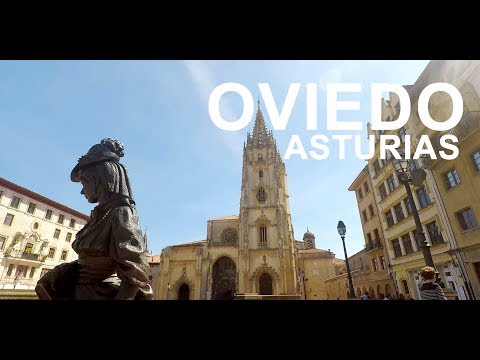 We can talk about The Fontan as the epicenter of Oviedo, since while walking by its roads and squares we can feel the most vitalistic spirit of this city. In the heart of the old Oviedo, this space keeps the primitive tradition of the capital of Asturias and is with no doubt, one of the most popular places of this Principality and also one of its best heritage jewels.

It was in 1660 when the edification of this area began. The first constructions were a series of houses built over arcades, and called Arch of the Shoes (Arch of Shoes). In one of the sides of the square of the Fontán opens the Square of Daoiz and Velarde. On one side of this, is what was the famous House of Comedies (House of Comedies) or the Theater of Fontán that today still keeps its old facades and is now the Public Library Peréz of Ayala. Joined to it is The Palace of the Duke of the Park (Palace of the Duke of the Park), that since 1892 is a property of the marquesses of San Feliz: and is also the most genuine baroque palace of Oviedo.

In its origins, this area was a natural lagoon That was in the outskirts of this city. This lagoon was filled in by natural springs. Its name comes from the main spring (source = fontán) that made its water flow into the lagoon. The nobles of this city convert this place into a recreational area. At the same time, the peasants who lived in the surroundings of the city thought that this was the ideal place to sell natural products from their gardens: milk, vegetables, cheeses, hens, etc. The increasing commercial pulse of this area also offered a place for the artisans. And in this way, little by little, a constant market was created that has come to our days.

In the 18th century this lagoon was drained and in this place a square of arcades was built which served as a settlement for many shopkeepers. Not far from controversy, this square was recently restored since it was nearly in ruins. In 1996 the municipal authorities determined its demolition and reconstruction. In 1999 a new square was inaugurated that still keeps the simplicity and proportions of the old one.

The Fontán Market has been perfectly recreated in literature: in the famous novel "La Regenta". In it, we can find references to the square of Pan, and Ramón Pérez of Ayala immortalized it in his well-known novel "Tigre Juan". This literature can be lived in when we walk by these roads, feeling like one of those fiction characters. All this area is often crowded by walkers and shops where we can find the best offers on fashion clothes, old ones and new handicrafts. But we can also enjoy the best local gastronomy and buy some flowers and plants in a near traveling flower market. In addition, there is also a market of fresh products surrounded by shops and bars of catering.

Its commercial origin is still the essence of its activity. In the center of the square of Daoiz and Velarde we find a famous sculpture dedicated to the old stallholders. In this square and in that of Fontán there is a traveling market every Thursday, Saturday and Sunday in the mornings. This is a crowded market in which we can find everything because at first sight, we are attracted by different lots of things. Here we find usual customers, occasional clients or simply busybodies.

We are talking about one of the most genuine flea markets of our country Not only because of its diversity of offers, but also because it is strictly the canon of any popular market: nice environment, many selling shops and picturesque bars where we can take a snack while we are shopping.

You may also enjoy discovering the historical center of Oviedo.

One response to "Fontán: the most popular area of ​​Oviedo"