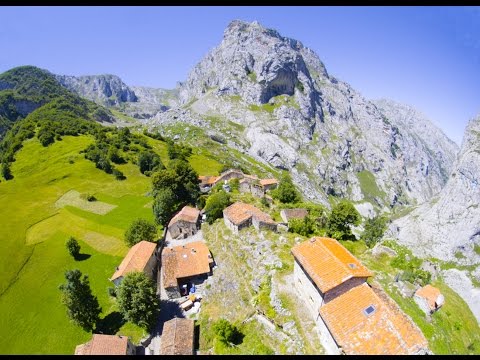 Until recently Bulnes was only reached by a serpentine path, carved between rocks of extraordinary beauty. There used to be a scarce traffic of humans and mules with provisions and equipment, also the mail usually traveled this route. A route that hardly had any function in winter, when it was hidden in the snow and needed a helicopter for some other urgency or local need.

Now, what was the last village without road access of Asturias can be accessed underground in just seven minutes. This is possible thanks to the services of a funicular that moves at about 22 kilometers per hour by a cable traction system on track.

A costly and controversial rise that for many has meant the breaking of the traditional isolation of Bulnes, and for others an unfortunate and negative investment for the environment and the social customs of the environment. Bulnes has been only two kilometers away from the town of Poncebos, linked by an underground tunnel that crosses the Peña Maín.

What to see in Bulnes

Controversies aside, Bulnes deserves a visit for many reasons, either by funicular or on foot. In the village there is an unusual atmosphere, a rustic reality in which only a dozen neighbors can be seen, and a good number of Asturian houses, many of them in ruins, including their parish. The town that now sees its tourist services reinforced enjoys a popular bar, which is not populous, where to eat a good stew and the occasional lodging to spend the night.

Some time ago there was a camping place nearby where lovers of nature and also those of risk used to go, since Bulnes serves as a prelude to the famous Urriellu Peak (Naranjo de Bulnes), a classic challenge for mountaineers from all over the peninsula. The village is perched at an affordable 649 meters high, but surrounded by powerful summits of 1.600 meters of altitude. The new possibilities of accommodation, and some extra comfort now predispose to another type of more comfortable rooms to which we are not going to remove merits or motives here. It is simply the desire of Desdeasturias.com, like that of many other Asturian lovers of the area, that the use and enjoyment of this natural enclave entails at all times respect for its inhabitants and the existing habitat. It should not be overlooked that this village, in which they came to live more than 50 people, was founded by pastors who one day decided to live permanently in this place, giving up too many things. In this way you can not reach Bulnes in a disrespectful way, breaking a way of life assumed by the mountaineers, or mistreating a landscape that they cared for decades.

We propose, for scenic beauty and enjoyment of the trekking, the classic mountain path that its neighbors used throughout their lives and that hardly carries any risk, or unexpected shocks. The road, yes, appears before us steep to the first change.

We have parked our vehicle in the town of Poncebos, just seven kilometers from Arenas de Cabrales. The mountain track that starts here has nothing to envy to other classic routes of the Asturian mountain as the well-known Ruta del Cares which also starts in Poncebos. The trip to Bulnes is much shorter, but it is barely flat and has the hardness to go and return, feeling a bit tired and very satisfied with the route. It is suitable for all ages and does not require a particularly athletic physical form. From the Jaya bridge, next to the Poncebos junction, and up to the town of Bulnes we will have ascended more than 400 vertical drop meters, with slopes that reach 18 percent. The ascent is almost continued by a path tiled with old stones, polished harmonically by meteorology and walkers over many decades. In some sections, the rock forms tailored steps built patiently by erosion, without impasto or more material than the rock itself. In front we see what is popularly known as the Amuesa Murallón. Equal vertical and surprising that the Peña Maín that we are bordering, by an abrupt and spectacular throat on the Texu river, a channel that carries the same name of the river and that separates both natural moles.

The road continues four kilometers, an hour and a half of road that at the end it becomes flat and empties into a kind of coquettish and tiny valley in which it is inscribed Bulnes, as a minor landing to continue climbing the giant staircase that climbs towards the highest mountains.

To one side we see, on a small hill, Bulnes de Arriba, later: Bulnes de Abajo, united by the same path. There are two neighborhoods that are also known as the Castle and the Villa. During the winter, they live on livestock and in the summer of tourism and mountain enthusiasm. The entrance to the town is made by its cemetery and the ruined rector's house, possibly the most noble building in the town. In the side of the cemetery we find the chapel that keeps the Virgen de las Nieves, the patron saint of the town to which the local fiesta is dedicated, at the beginning of August.

A stream leaves two symmetrical parts of the village on both sides: houses, shelters, some store, bar, tents that still keep food for the cattle and stables. The alleys have a natural surface, they are limestone just like the mountain, as well as the masonry of the walls that surround the meadows.

Once here it is only to enjoy good company or dedicate the rest of the day to contemplation, which is a lot. It can also be that we encourage ourselves to sleep to start one of the several high mountain routes that we propose, almost incites, the place.

6 answers to "Bulnes, heart of the Picos de Europa"