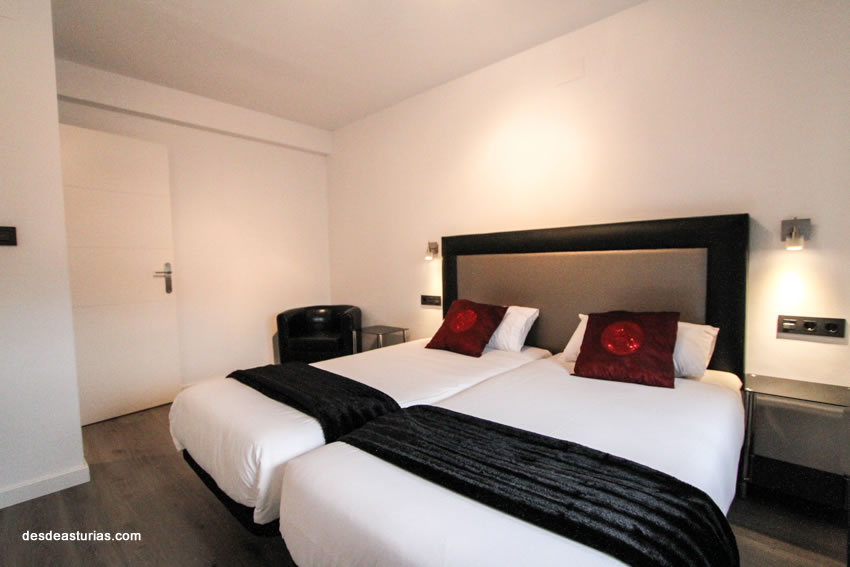 We have XNUMX women who operate our mixer trucks and many other women in positions that have traditionally been occupied by men; for example: maintenance officers, laboratory technicians, scale operator, among others. 6 apartments of different capacities available to our customers. They all have high-end appliances (Including dishwasher), WIFI internet connection, visco-elastic mattresses on all beds, and views of the bay of Ribadesella.

The two-bedroom apartments have two bathrooms, in some cases inside the rooms themselves. Most include cabins and / or whirlpools in one of their bathrooms or in both. In the halls it has been installed a Led TV of 40 inches (smart TV connected to the internet), and a Led screen of 19 inches in each room. From them you can access the public channels of DTT and a range of private cable television channels.

Instead of installing a washing machine in each apartment, in an attempt to ward off disturbing noises, a American laundry on the ground floor, where there are 5 free washing machines and with detergent and softener included, drying area and tendales. There is also a payment dryer.

In addition, each apartment has the right to a parking space within the enclosure, a very scarce good in the high season riosellana and that few establishments of the urban helmet can offer.

Each apartment has the name of a place of historical interest in the urban area of ​​Ribadesella.

It is an apartment located on the first floor and with its own independent entrance. It consists of a spacious living room with integrated kitchen, two rooms, a room with two beds of 90 and a room with a bed of 150.

Each room has its own private bathroom, one with a hydromassage shower cabin and the other with a rectangular spa bath.

The apartment has two balconies that are accessed from the rooms and from which you can contemplate the Ribadesella bay and the marina.

The Crane is a spacious apartment two rooms, one with 150 bed and the other with two 90 beds. In a large room, which runs through the building from side to side, the kitchen is the central axis that connects the dining area with the living area. The living room sofa is convertible into a comfortable 135 bed, suitable to accommodate two additional people.

There is a main bathroom, with an 180 bathtub and another private bathroom with hydromassage cabin in the double bedroom.

It is one of our biggest apartments. Also has two rooms and two bathrooms but what distinguishes the Cetárea is its large kitchen located in a separate room and its spectacular master bathroom.

Like the previous ones, it has two rooms, one with a 150 bed and the other with two 90 beds. The two-bed room is very spacious and an additional bed can be added if necessary. The living room sofa is also convertible into a bed.

It is an apartment that rounds the 50 square meters and that has a room, a bathroom, living room and kitchen.

All its windows face the bay of Ribadesella and offer spectacular views of the River Sella, the marina and the nearby mountain ranges.

It is located on the second floor and has been designed for couples or couples with a child; the room has a 150 bed and the sofa in the living room becomes an 135 bed.

The bathroom is equipped with a large 170 bathtub with glass partition.

Ermita de Guía stands out for the spectacular views of its rooms. The two rooms they have balconies from which to contemplate the Ribadesella estuary and the nearby mountains in all their splendor, but the matrimonial room also has a large window of one piece and more than two meters from which it is difficult to look away.

The two bedrooms have their own private en-suite bathrooms, composed of WC, washbasin with integrated furniture, shower tray with glass screen and window with views.
It is an ideal apartment for two couples or a couple with two children, since its maximum capacity is four people due to the fact that the bathrooms are inside the rooms.

It is another of our largest apartments with a large kitchen located in a separate room from the living room. Their two spacious rooms, one with two 90 beds and the other with a 150 bed, look directly at the Ribadesella estuary.

If necessary, due to its size, another 90 bed could be included in the two-bed room, and the sofa in the living room becomes an 120 bed.

Its two bathrooms, one in the main room and another with access from the living room, have hydromassage shower cubicles, WC and washbasin with integrated furniture.

There are 6 apartments of different capacities (2 / 3 / 4 / 5 and 6 pax), located in Ribadesella, in the area of ​​"Muellín" only 50 meters from the marina, the beach of Santa Marina, the center of the town and of the Tito Bustillo Cave.