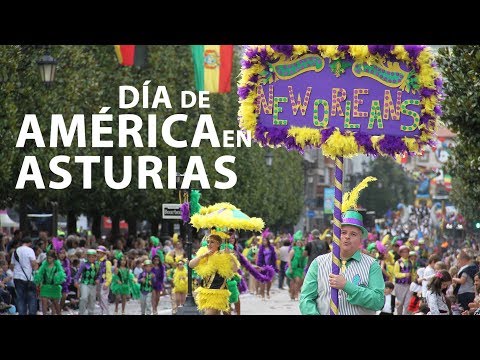 When the summer ends, Asturias still has to reserve some extra strength because the San Mateo festivities arrive. September in Oviedo is pure fun. For a couple of weeks, the city offers a wide range of activities. Ovetenses, Asturians and tourists mingle in a festive whirlwind. Like the summer solstice, San Mateo is the border that separates the world from the illusion and the one from the daily life that awaits us in autumn.This 2018 are celebrated from the 14 to the 23 for September.

The Spa Real Spa has architectural elements from the XVIII, XIX, XX and XXI centuries, it is ... END_OF_DOCUMENT_TOKEN_TO_BE_REPLACED

The Ayre Hotel Oviedo is located in a unique building of the Oviedo city, it is part of the Palacio ... END_OF_DOCUMENT_TOKEN_TO_BE_REPLACED

The Aparthotel Oviedo Campus offers modern facilities, is well equipped and has a good ... END_OF_DOCUMENT_TOKEN_TO_BE_REPLACED

The Hotel NH Oviedo Principado is located in one of the streets of the old town, opposite the historic ... END_OF_DOCUMENT_TOKEN_TO_BE_REPLACED

The Room Mate Marcos is installed in a central area of ​​the capital of Oviedo, just a few minutes walk from ... END_OF_DOCUMENT_TOKEN_TO_BE_REPLACED

The Eurostars Hotel de la Reconquista is an emblematic hotel in the city of Oviedo, not in vain are you staying ... END_OF_DOCUMENT_TOKEN_TO_BE_REPLACED

Map: how to get to Fiestas de San Mateo in Oviedo

The holidays are loaded with concerts, pilgrimages and festivals, children's games, humor, folklore, bullfighting fairs, fireworks, sports competitions ... Although the official program of the festivities normally runs from 15 to 21 in September, the party lasts several days and starts earlier. And although it is concentrated in the historical center of the city, the joy and the desire for fun are transmitted to all the Oviedo places.

In the 80 years, and after a gradual evolution of the profane events in the development of the party, the mold of the San Mateo was created that we know today, when moving part of the festivities to the street so that the public could enjoy the outdoors in a continuous way. Nowadays the squares of the old town are being prepared to house the already famous ones chiringuitos and musical performances and theater on the street are enhanced. The terraces and booths warm the atmosphere and also help to regain strength to the tireless mateínos. In the center of the city, and especially in its historic center, San Mateo becomes a party to enjoy and live on foot. The "movida" is on the street, it is lived both at night and in the day around the beach bars and the performances.

The musical shows they have, perhaps, the biggest role, and they happen in venues that welcome different tastes. In the Plaza del Uguas, In the Feijoó Square concerts are held, in the Cathedral Square, with free admission, the musicians of jazz, flamenco, folk, Cuban music, and the most outstanding artists of the music scene in our country, delight all those who congregate in the vicinity. It is a good opportunity to have a drink listening to live music.

One of the most important days of San Mateo is The Day of America in Asturias. The Asturian emigrant has the 19 of September a show in his honor. The traditional parade is celebrated in style and in a big way. The morning is dressed in music and colorful with folkloric groups and fanfares from throughout the region. In the afternoon, a cavalcade full of floats and folklore from Cuba, Colombia, Mexico, Brazil, Argentina ... goes through the main streets of the city. The sidewalks are crowded with the public, as are the balconies; and the passage of the cavalcade leaves behind a trail of confetti and serpentines. In this parade no year is missing the popular «haigas»: ostentatious and old cars that circulate in the streets of Oviedo. These are prototypes such as those that the Asturian emigrant acquired to publicize his new wealthy condition. When the salesman on duty asked him: "What kind of car do you want?", The Indian - according to the legend - replied: "The biggest one to do."

The Day of America in Asturias has been celebrated since 1950 and is a declared holiday of National Tourist Interest. In addition to floats, folkloric groups and luxurious cars, in Oviedo that day people coming from all the countries of America recall that day. In the box of authorities never lack the representatives and delegations of American countries.

The 21 of September, big day of San Mateo, everyone used to eat on the street: parks, fields and gardens. One eats the "bollu preñau", a very Asturian product that is nothing more than bread stuffed with chorizo. When cooking together, the last one leaves all its fat in the bread. The bollu is watered with a bottle of wine and enjoyed in the company of friends and family. They are also tradition this day «les paxarines», figures of flour, egg yolk and saffron, which, it is said, protect houses against storms.

This day, that of the official closing of the festivities, takes place on the night of Fireworks. Everything is spectacular. This event was held for the first time at 1920. It takes place in the Inverno Park and is witnessed all the years by more than 100.000 spectators.